skip to main | skip to sidebar

Posted by The Wyatt Galleries at 2:16 PM No comments:

Our new 2015 Christmas Card by Kenneth Wyatt is available. View the 2015 Christmas card, read the poem, and place your order now while supplies last!!!

We just released four new notecards!. A Horse of A Different Color, Good Morning God, One Of A Kind, and Rider On The Rim.

Our Annual Christmas Show & Open House will open November 29th, 2015 from 1pm-5pm in our Tulia, Tx gallery, and continue through December 24, 2015. You are invited...and bring someone with you!!!! YOUR INVITATION AND SHOW INFO


Posted by The Wyatt Galleries at 3:24 PM No comments: 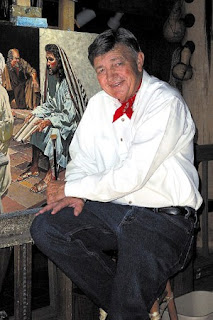 After Saturday, May 14, 2011, Kenneth Wyatt might want to include two additional letters when he signs his artwork - Dr.
On Saturday evening, Wyatt received an honorary Doctor of Humane Letters degree from Tarleton State University, from which the renowned western and Christian artist from Tulia graduated more than 50 years ago.
"Mr. Wyatt has achieved excellence in the field of arts and has performed meritorious and outstanding service to Tarleton," stated a letter to the Texas A&M University System Board of Regents nominating Wyatt for the honor. "Additionally, his life serves as an example of the university's aspirations for its students."
It's only the third time Tarleton, located in Stephenville, has awarded an honorary doctorate in the 112-year history of the school.
Wyatt called the honorary doctorate an "overwhelming honor" and accepted it in memory of his father, V.H. Wyatt.
"He fulfilled his dream and mine by moving our family to Stephenville just so his children could get a good college education," Wyatt said. "I am humbly grateful to Tarleton University and my dad for ‘sculpting' me into the man I am today."
Born in 1930 in Wichita Falls as the son of a Stephenville contractor, Wyatt attended Stephenville High School before graduating from what was then known as John Tarleton Junior College in 1946. Wyatt later graduated from McMurry College before doing graduate work at Baylor and the University of Denver. He attended Iliff School of Theology in Denver and has been an ordained Methodist minister for 32 years.
Tarleton President Dr. F. Dominic Dottavio called Wyatt's life achievements "remarkable."
Wyatt has created more than 9,000 pieces of art celebrating his native Texas and the American West. A painter, sculptor, author, poet and illustrator, his work is found in the collections of President George W. Bush, the King of Dubai and Queen Elizabeth II of England and can be seen in state capitals, national museums, foundations and private collections in more than 90 countries.
Wyatt recently created and donated to Tarleton a painting depicting a Texas country scene with special details reminiscent of Tarleton.
Previously, he was recognized by Tarleton as its Outstanding Alumnus of the 1940s Decade.

Kenneth Wyatt’s spiritual journey mirrors his own life lesson to "stay within the will of the Father." At the age of 14, Kenneth was first called to ministry, licensed as a local pastor, then appointed to a local church in central Texas … all within the span of two weeks.

At the direction of that same calling, he finds himself 45 years later, pursuing a new ministry in art. Known for his Western and religious-based art, you can now find Kenneth Wyatt paintings displayed throughout the world in churches of all denominations … sharing the Word of God to all that view. Visit The Wyatt Galleries online!
Posted by The Wyatt Galleries at 2:30 PM No comments:

Promote Your Page Too